Why Didn’t the Jews Fight Back Against the Egyptians?
April 2, 2015

Rabbi Yaakov, known as the Ba’al Haturim (14th Century), explains the words chamushim, (armed), as also alluding to the word of chamesh, (five). He writes that each Jew left Egypt and traveled through the desert carried five different types of weapons, including swords, shields, clubs, bows, and arrows. 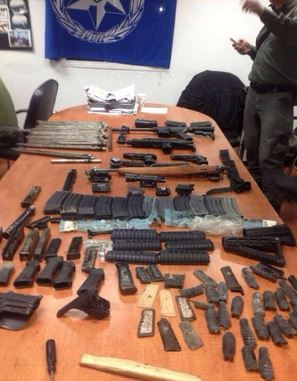 Rabbi Asher Amishivitz (20th Century), in his book on the weekly portions expounds further on the word chamushim by splitting up the word to read “Chamesh Yam” (armed from the sea). When the Egyptians were drowned in their pursuit of the Jews, all the gold, silver, jewels, and weaponry they had been carrying with them was washed up on the shore to where the Jews had crossed over, and each Jew now had many more than the original five weapons he had left Egypt with.

Although today, liberal- minded Jews are often advocated of strict gun laws and shudder at the thought of having a personal weapon, this verse shows that Jews were traditionally armed and thus prepared to face the dangers inherent in life. If evil-minded criminals have weapons, how much more so decent citizens should be armed in self-protection!

Nonetheless, the question arises that if the Jews a huge body of people that included 600,000 men between the ages of twenty and sixty, were so heavily armed, why did the Almighty not command them to fight the Egyptians using natural means? One of the principles of the Torah is that G-d only works via miracles if no other option is available, and here it would seem that the miraculous splitting of the sea was unnecessary.

Another opinion from the book of Tallalei Oros offers an additional insight on this matter. The author explains that God wanted the Jews to entertain no doubts whatsoever regarding Who had saved them. Had they actively participated in their redemption, they could be tempted to attribute their success to their own strength and merits – what is known in Torah literature as “Kochi v’otzem yadi” (My strength and the might of my hand).

Instead, after witnessing the miraculous splitting of the sea and the drowning of their once-invincible enemies, the Jews reached an unprecedented level of faith in God and internalized the fact that God is the One Who molds history and changes the course of events at will.

At that point, there was no longer a danger that even when they raised their own weapons in war they would attribute their victories to their own might – rather, they would constantly recall that only the power imbued in them by God enabled them prevail.