Weekly Torah Portion: The Spiritual and the Mundane
February 5, 2016 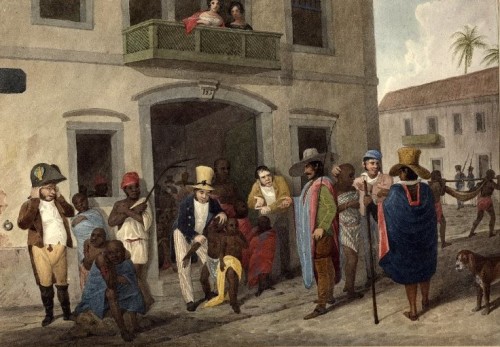 While the Torah permits slavery, its laws are uniquely humane. [The Slave Market at Rio, by Edward Francis Finden / Wiki Commons]

Most of this week’s Torah portion involves various civil laws which help govern a kind and generous society.  The portion begins with the laws of slavery, which, when compared to the norms of society in Biblical times, are particularly humane.  It continues to deal with issues of accidental killing, murder, kidnapping, respecting one’s parents, personal injury and property damage issues and the relevant compensation, theft, and the just treatment of strangers, widows and orphans.  Rules of justice and prohibitions against bribery are also mentioned.

These laws are presented just after the Ten Commandments are given on Mt. Sinai.  Following an event of such spiritual magnitude, an event that includes thunder and lightening, trumpets blowing and God’s revelation to human beings, the Torah immediately transitions to the most mundane of issues, issues regarding daily problems between human beings, with seemingly no relationship to God.

Furthermore, it is unclear when these laws were actually spoken to Moses.  Just after the Ten Commandments are given, Scripture tells us that Moses goes into the mist “where God was” (20:18). God speaks to Moses and gives him these laws.  However, just after Moses teaches these laws, God speaks to him and commands him to ascend the mountain to receive the tablets.  The portion ends when Moses is on the mountain for 40 days and 40 nights.  Does Moses go up the mountain twice, speak to God on two different occasions, or is this all one long teaching from God which Moses hears on Sinai and transmits to the Children of Israel later on?  Scripture is unclear.

However, what is clear is that these basic moral and civil laws are placed in the Bible just after the Ten Commandments are given.  And perhaps that is the point.  It is probable that Moses actually heard these laws while on Sinai during his 40 day sojourn there, and that he actually only taught the Children of Israel these laws much later, after the sin of the Golden Calf and after Moses’ final descent from Sinai.  However, the Bible is communicating an important message to us by setting the order as it does.

Many faiths contain elements of spirituality, of some sort of spiritual encounter.  And, it is quite natural that following such an experience, a human being will no longer be interested in mundane and earthly issues. He wants to remain in the heavens, communicating with God and attending only to his spiritual relationship.  But God brings us back down to earth.

Actually, the first commandment listed after Revelation is the instruction to build an altar, out of earth.  We are told that this earth-bound altar will be a human vehicle to serve God.  Following this section, God takes us to the core of human moral existence.  If we ignore our fellow man, if we act unjustly, if we steal, murder, cause injury to another, we are sinning against God.  We cannot absolve ourselves of responsibilities to our fellow man merely because we have experienced the spiritual.  We must immediately come back down to earth and make sure the strangers in our midst are comfortable and the widows and orphans are cared for.

The human-bound commandments are purposely placed where they will ground us in our human responsibilities.  And the text purposely jumps back and forth between Moses on the mountain with God and Moses teaching the people the nitty-gritty of living a moral life.  For that is what our life is supposed to be – a constant tension, and constant synthesis, between our relationship with God and our relationship with our fellow human beings.