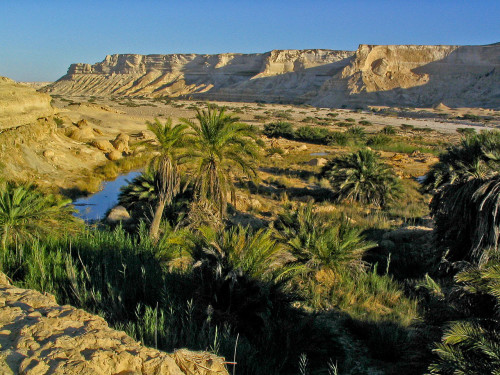 Throughout the night, God keeps His angel and His Pillar of Cloud between the Israelite camp and the Egyptians. Moses holds his staff over the waters, and God sends a great wind to blow over the sea. The waters part, allowing the Israelites to safely cross on dry land. When the Egyptians move to cross after them, however, God interferes with their movements. He instructs Moses to again stretch out his staff over the waters, and they come crashing down upon the Egyptians as they try to escape. So moved by the miracle they witness, the Children of Israel sing a song of praise to God for His salvation. Miriam, sister of Moses and Aaron, also leads the women in song.

Despite their gratitude for God’s miracles, the Children of Israel are quick to complain when, three days later, they cannot find potable water. Moses cries out to God, who shows him a tree whose bark would make the water sweet (drinkable). They name the place Mara (bitter) after the bitter waters. God also promises the people if they keep His commandments, He will never visit the diseases of Egypt upon them. From there, the people journey to Elim, where they find plenty to eat and drink.

The Israel Bible points out a Jewish tradition, that the Hebrew month ‘Iyar’ is named for an acronym from our portion, ani Hashem rof’echa (I am God your Healer). Only after the Children of Israel were redeemed from Egypt in Nissan were they able to be healed from the trauma of slavery. The name of the month also serves as a constant reminder that everything, including our health, is in the hands of God.

This is not the only acronym in our portion. The Maccabees, who fought the Hellenists in the Chanukkah story, are so called because of a verse in the song the Israelites sang at the sea: mi kamocha b’elim Hashem, who is like you, God?