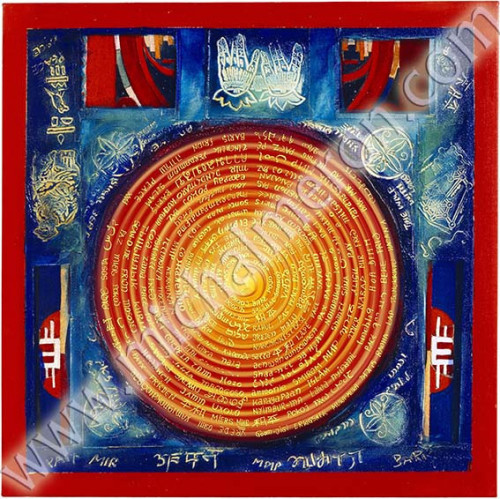 Circle of Peace by Michal Meron

Michal Meron is a famous Israeli artist with a studio just outside of Tel Aviv in the old city of Jaffa. She grew up in Haifa and learned her craft at the Tel Hai Art College in Israel, receiving additional training in Vienna, Austria.

A very talented artist, Meron can work with several different artistic styles, depending on the project, including watercolors, metal etchings, acrylics and mixed media techniques.

A true lover of Judaism and of Israel, Meron has a real passion for creating Judaica. Her personal belief is that any concept or symbolism that comes from the Jewish tradition can be interpreted through modern art.

Meron has been commissioned by multiple Jewish museums in Europe to create a series of painting depicting Jewish life during the holidays and in the synagogues.

One of her more popular Judaica works is a beautiful Passover haggadah, that has been translated into multiple languages, which can be used during the Seder service. On every page of the haggadah, along with the text, are wonderful illustrations that are enjoyed by both children and adults alike.

Her specially-commissioned illuminated Torahs really bring the Torah to life, by illustrating and depicting the main topics in each of the 54 weekly chapters.

One of Meron’s styles not mentioned earlier is micrography, a style of using tiny text to create images or parts of images.

A great example of micrography work from Meron is the Blue Circle of Peace. What makes this acrylic painting so special is that contains the word “peace” written in 50 different languages.

As far as Jewish concepts go, peace is considered to be one of the three pillars of the world. But it is unachievable without everyone working together, regardless of race, religion or language. Meron is able to convey that message, by including so many different ways to say peace within the “circle of peace.” If you removed even one iteration of “peace”, the circle, much like the idea of peace, would become unbalanced and unstable.

This painting, complete with peace symbols from different cultures from all over the world, is perhaps one of the most inspiring pieces in Meron’s vast artistic library.

The message conveyed in the Blue Circe of Peace is so perfect, it truly belongs hanging on a wall of every home.