Saying Goodbye to Ezra at the Airport
November 23, 2015 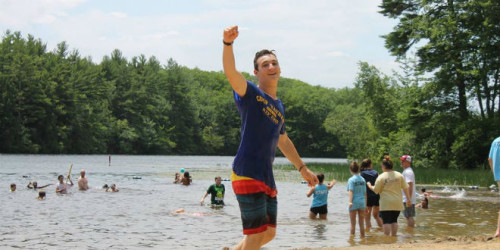 It is not uncommon to find people saying farewell in an airport.

People hug each other. Sometimes you will see people wiping away tears.

A thousand people came to the airport to say goodbye to Ezra Schwartz, who was being flown back for burial in his hometown of Boston.

People held each other tight. People cried. Eighteen-year-old Ezra Schwartz, who was studying Torah in a Yeshiva in Israel, was gunned down Thursday evening while traveling in a van outside of Jerusalem, in the area of Gush Etzion. He was volunteering that afternoon, bringing snacks to the soldiers on duty in that area.

As the crowd gathered, Ezra’s classmates, rabbis, and friends, who had come to show their last respects, formed a large circle and began to sing.  They were songs of brotherhood, of faith in God, songs that prayed for peace. Some of his friends were draped in the flag of Israel. Arm in arm, people swayed back and forth, lifting their voices in supplication and strength.

Natan Sharansky, the heroic refusnik and now Chairman of the Jewish Agency, was present, and offered words of eulogy. Ofir Shaer, the father of Gilad z”l, one of the three boys who was kidnapped and murdered just over a year ago, was also there to give strength and share in this pain and tragedy, one that he knows too well.

The people of Israel stand together with the Ezra’s parents and family.

The Jewish people stand together with his community in Boston.

We stand with his friends and teachers at his Yeshiva.

Our hearts are broken with your hearts.

We cried when we heard that Ezra was killed.

We will not forget him.

We will learn from him.

We will carry on in the kindness and goodness with which he lived his life.

The night proceeded with eulogies that described Ezra’s beautiful smile, his warmth, his kindness, his love for his siblings, his close relationship with his family, a life lived with much joy, and a life tragically cut short.

The casket, draped in the flag of Israel, was set to brought to the plane that would fly his body back home. At that time, those present were asked to exit the airport. One group was asked to stay: Ezra’s classmates who have been studying Torah with him these past few months in yeshiva. Each student approached the coffin, cried, offered a prayer and said a tearful goodbye to their friend Ezra.

This Shabbat, Jewish people around the world read in the Torah of their forefather Jacob leaving the Land of Israel. The Sages teach in the Midrash that angels from heaven come to meet Jacob and escort him on his journey.

The angels of heaven are crying as they escort Ezra back home.