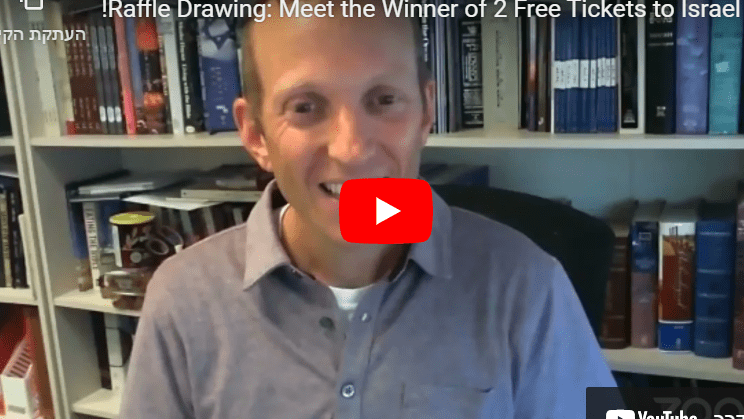 Several weeks ago, Israel365 launched a raffle for two free round-trip tickets to Israel. The raffle ended on Jerusalem Day (May 10). What sparked this incredible opportunity? “It was a team effort on the Israel365 staff’s part,” says Israel365 director Rabbi Tuly Weisz. Rabbi Weisz continued: “with the skies finally opening after Israel beat the Coronavirus, we thought the time was right to offer our beloved constituents the opportunity to come and see this inspirational country for themselves.” Now that Israel is at war, the 2 tickets won in the raffle were set to take place on a later date. Because there has been a non-stop barrage of missiles aimed at Israel,  the Israel365 organization had held off on announcing the winner. “It just doesn’t feel appropriate at this moment” Rabbi Weisz said.

But the lottery’s victor was finally revealed on Tuesday. Kris Brose from La Crosse, Wisconsin was announced as the winner of the Israel365 raffle.

Yet despite never having been to Israel, Ms. Brose decided to donate the proceeds of her tickets to an Israeli cause.
And although she exchanged her prize for a charitable donation, Brose is still optimistic about her chances of eventually flying to Israel saying: “God is going to let us all come. I mean – Hashem has got this plan” she told Israel365 in an exclusive interview.
As it says in the Bible:

“And there is hope for your future —declares Hashem: Your children shall return to their country (Jeremiah 31:16).”

His plan is unfolding before our very eyes as the Children of Israel return to their homeland. The entire Israel365 organization is grateful to Kris for recognizing the impact her donation will have on the fulfillment of biblical prophecy as we put the funds to good use. They will go to helping victims of terror, assisting elderly Holocaust survivors, raising awareness about the truth of the State of Israel, and towards helping Lone Soldiers in the Israel Defense Forces who have left their families behind to serve and protect the State of Israel.
Even this war is part of His plan, though we may not know it yet. What we do know is that it is not a coincidence that the current Israel Defense Forces’ mission is dubbed Guardians of the Wall and that our most staunch supporters are called Watchmen of the Wall. Just as our forces protect Israel constantly, so to do our Watchmen. To become a Watchmen of the Wall, please consider becoming a monthly donor today!