Poetry Expresses the Universal in the Personal
January 28, 2016 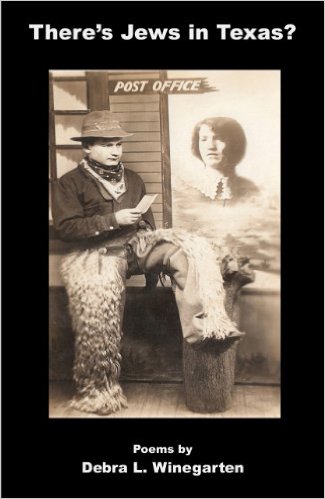 There’s Jews in Texas? A collection of poetry by Debra Winegarten

A third-generation Texan, Debra Winegarten began writing poetry at a young age, and was first published when she was in the third grade. Her skill as a poet has increased over time, and her topics are both relatable and meaningful, even if one is not from Texas.

Thematically, Winegarten’s poetry touches on her experiences growing up as a Jew in Texas, as the title indicates. She was raised in the Reform Movement, and had a tumultuous experience in deepening her commitment to Judaism, particularly when she was let down by Jewish leadership figures she’d admired. But these poems go beyond the specifics of that upbringing, and convey emotions and experiences that are universal, in that they are felt personally by so many, with such diverse stories.

There’s Jews in Texas? opens with reflections on second grade, including the discovery of minority status. That is, the same events that take place in the lives of the vast majority of people (Americans, anyway) are shaped by the uniqueness of Winegarten’s tale. Moreover, she tells her stories with the wisdom of hindsight, bringing an adult perspective to the childhood memories.

Other poems address the loss of her mother, another experience that is both universal and intensely personal. “Kaddish”, for example, reflects this. Indeed, Winegarten’s mother is a prominent figure in these poems.

Winegarten is an artist with her words. She brings a new lens to her own perspective on the world in her poems, and in sharing those reflections with her readers, they, too, acquire new insight on their own experiences in the world. Read them and remember, read them and laugh, read them and cry; any which way, these poems will bring you to muse and reflect, and isn’t that the beauty of poetry?