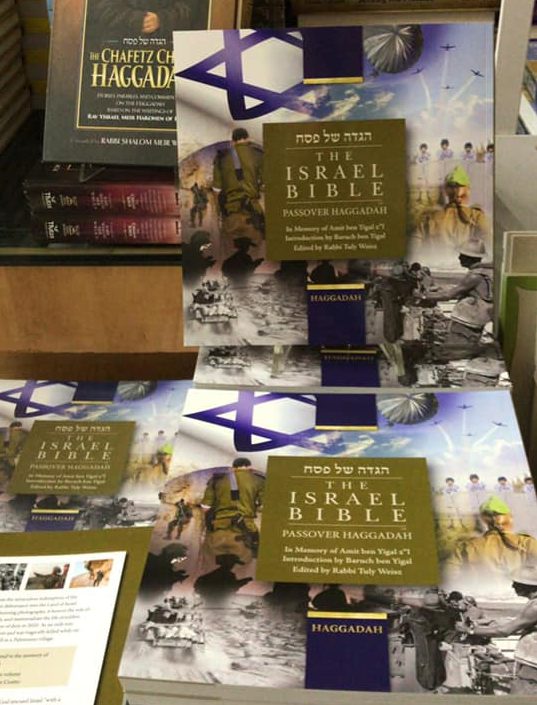 Every year on Passover, families get together for a festive meal to recall the story of the Exodus from Egypt. The ritual is performed by reading a book called the ‘Haggadah.’

Following his successful launch of a Purim Megillah in honor of terror victim Esther Horgen, Israel365 founder Rabbi Tuly Weisz launched a similar initiative publishing a Passover Haggadah in honor of the only IDF soldier who was killed in 2020 – Amit ben Yigal.

The book’s introduction was written by Amit’s father Baruch Ben Yigal. The Haggadah is decorated with images of ben Yigal including a letter from the fallen hero describing his comradery with his fellow Israeli troops.

“It’s really dedicated to the ancient and modern Jewish soldiers” Rabbi Weisz explains adding that Upon their exodus from Egypt the “first thing that the Jewish people are told is to establish an army.”

And in case you’re worried that the translation will be hard to understand, Rabbi Weisz reassures the interviewer saying that he has commissioned his own translation making it “a unique, original and very readable translation.”

“Whoever you are; Jewish, non-Jewish, religious not, religious, you’ll get a lot out of the Israel Bible Passover Haggadah” he concludes.
Amit’s father, Baruch Ben Yigal, of Ramat Gan, Israel, wrote the following letter to Rabbi Weisz about the new haggadah dedicated to his son:

It’s been nearly one year since my precious son Amit was taken from me. My whole life revolved around my boy and in my worst nightmares, I never believed I’d beknown as a ‘bereaved father. ’Lone children are not usually allowed into combat units, especially dangerous ones, without special permission from their parents. He wanted to serve in a combat unit and asked that I grant him permission to do so. I remember Amit telling me, “I want to go to a combat unit and have a meaningful service.” I tried talking him out of it. “Amit, you are my only son, I have nothing besides you. My father died years ago, my mother is no longer alive. You are the only one I have in this world.” But Amit insisted, “Please sign,” and I could not resist. I signed the army’s permission form and turned to Amit and recited the priestly blessing over him: “May Hashem bless you and safeguard you. May Hashem turn His countenance towards and show you favor. May Hashem lift His face towards you and grant you peace.” Amit didn’t want to serve in just any combat unit, he strived for the most elite Golani brigade. And even that wasn’t enough for him, Amit always wanted to achieve higher levels within Golani, which he did. He was truly a hero of Israel. What motivated Amit so deeply to serve in the IDF?I raised my son in a home that was proudly Jewish and passionately Zionist. My own father was a Holocaust Survivor from Libya who was sent as a young man to the Giado Concentration Camp. After surviving the horrors of the Concentration Camp, my father moved to Israel and was extremely grateful to the State of Israel for serving as a place of refuge for him and for all of those who survived the Holocaust. As a teenager, Amit went on a trip with his high school to Poland where he was very moved by his visit to Auschwitz and Treblinka. “Dad,” he told me, “only the IDF can prevent another Holocaust, and I will do whatever it takes to keep our people safe in our homeland.” This experience made a deep impact on my young son, and we spoke about it every Passover when we read in the Haggadah, “in every generation they rise up against us to destroy us. Yet, the Holy One, blessed is He saves us from their hand.” Growing up in our very traditional Jewish home, Passover was not just a regular holiday and the Haggadah was not just a regular book. Amit and I would begin preparing weeks before Passover studying the Haggadah. I remember Amit asking why Moshe didn’t personally strike the Nile to bring the first plague of blood and allowed his brother Aharon to do so? Amit explained that since the Nile saved Moshe’s life as a baby, he felt gratitude to the river and couldn’t bring himself to strike it. Showing appreciation and gratitude, Hakarat Hatov, was something that Amit excelled in, and so I want to say thank you as well. Although at times I feel broken inside, I want to thank God for giving me twenty-one great years of love and joy and fun with Amit. I always want to thank everyone who has stopped their lives to remember my son. Those who have organized events in his honor, those who have printed and distributed prayer books in his memory, and the twenty-three baby’s (so far!) that have been named Amit this past year. Every morning when I put on Tefillin, I pray that Hashem gives me the strength to make it through the day, and receiving the embrace of so many friends from all over Israel gives me strength to make it through each day. I also want to thank Rabbi Tuly Weisz and Israel365 for dedicating “The Israel Bible Passover Haggadah” in memory of Amit. Knowing that so many people will be using this Haggadah with Amit’s photos in it, is the greatest thing in the world and means so much to me. Am Yisrael Chai! The nation of Israel Lives!