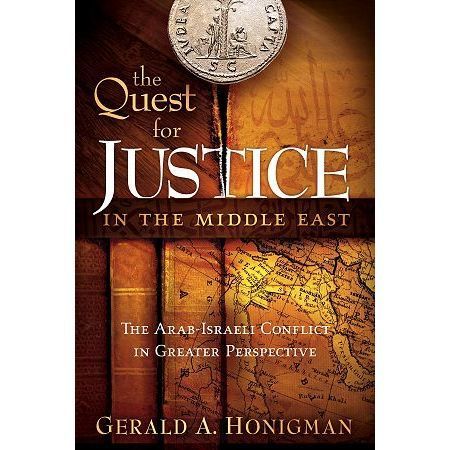 The Quest for Justice in the Middle East, by Gerald Honigman

Those who live in Israel – and those who love it – know they shouldn’t even bother reading general news sites for updates on the security situation in their beloved Land. Nor is it worthwhile to rely on any of the major media outlets for news on diplomacy, politics or even everyday life in Israel. After all, the painful – and all too familiar – reality is negativity, negativity, negativity, in every way, shape and form.

Yet, time and again, we dare hope against hope that maybe, just maybe, this time it will be different, and we find ourselves facing the scathing condemnations, one-sidedness and warped perspectives that seem to dog this Holy Land like no other place on Earth. The headlines are misleading and the “news” appalling, reducing any lover of Israel, freedom and truth to a state of despair. Our blood boils and our hearts cry out. Why can so few people seem to see the truth?

Israel is the only democracy in the Middle East. Israel maintains the most moral armed forces in the world. Israel welcomes people of all backgrounds into her borders. Israel produces some of the most life-saving, earth-conserving, energy-saving technology in the world. It is a haven of justice and a beacon of light amidst darkness and depravity. And yet it is one of the most hated countries on Earth, maligned alongside dictatorships like North Korea.

The Quest for Justice in the Middle East breathes new life into the world-weary reader, bringing a broader perspective and greater context to the most incendiary political scene on Earth. Gerald Honigman, its author, presents an extremely well-researched background to the conflict, cutting away the lies and smokescreens, asking the question we all long to hear answered: Where is the justice?

Honigman, a widely published academic and top-notch political thinker and researcher, takes an honest, erudite look at Arab subjugation of not just the Jews, but the Kurds, Assyrians, Berbers, Copts, Armenians and other minorities throughout the Middle East. He provides an abundance of historical data and up-to-date information, showing how the world majority and news media have ignored and whitewashed the most basic facts in order to present the warped views they wish to perpetuate. The book demonstrates how the international community has preferred to quietly accept Arab atrocities so they can continue to put forth their anti-Semitic agenda, hiding their true feelings behind euphemisms like “anti-Zionism” and “rights of refugees.”

Those who love Israel, justice and morality will gain stamina from this book. Those who want to learn more will find themselves floored by Honigman’s masterful research. And, hopefully, all those who stand up to bias and wrongdoing in the Middle East, Jew and non-Jew alike, will finally get a taste of that ever-elusive justice.