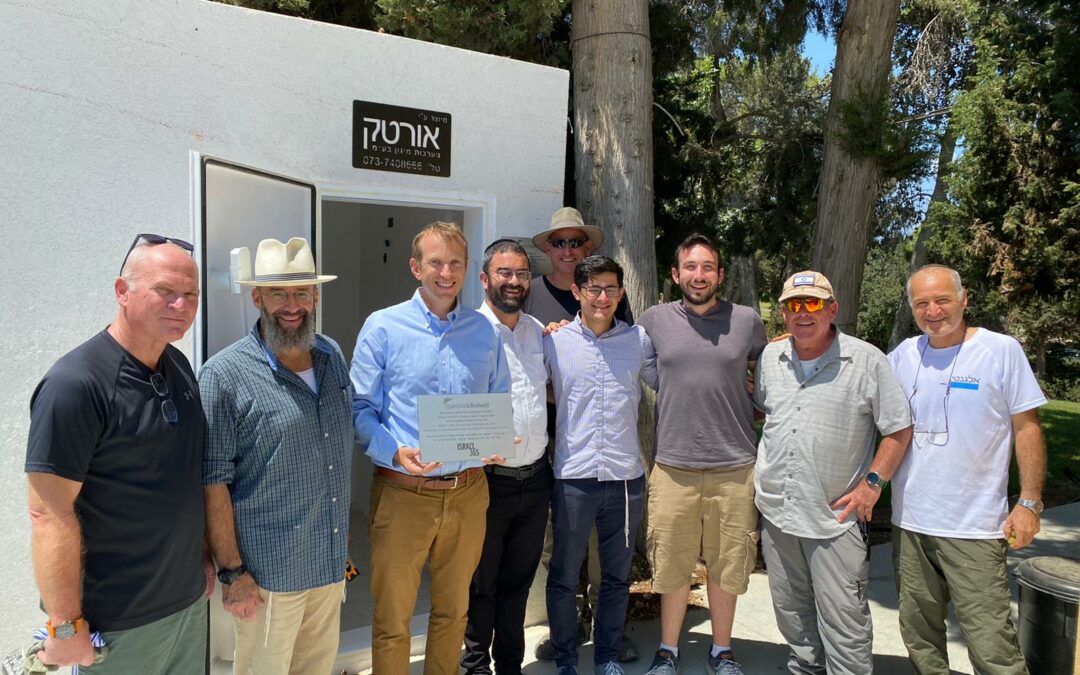 A few weeks ago, the Palestinian Islamic Jihad began a murderous barrage of rockets intent on killing as many Jews as possible. Even before the barrage ended, Israel365 began working to bring shelters to the targeted communities in southern Israel.

The first reinforced shelter was set in place on Thursday the 11th, protecting the residents of Kibbutz Gvar’am located about five miles from the Gaza border.

“I asked him where we could help immediately,” Rabbi Weisz said, committing on the spot to dedicating a cube shelter in Kibbutz Gvar’am, located about five miles from the Gaza border. The kibbutz has been targeted by Hamas rockets for many years and in 2008, a rocket killed a resident of the kibbutz. It should be remembered that the kibbutz is susceptible to rockets that directly target it as well as shortfalls from attacks targeting cities in the heart of Israel. Also, the Iron Dome shoots down incoming rockets over the kibbutz.

Bowman emphasized that the kibbutz was particularly susceptible to attacks.

“Short-range rockets, as well as intercepted longer-range rockets from Gaza present a great risk of death or injury to Gvar’am residents and guests,” Bowman told Israel365.

The reality is that early warning systems give residents in southern Israel about 15 seconds to get to a protected shelter. Communities that are on the border have even less time, sometimes as little as seven seconds. Residents are frequently required to seek shelter while distant from any indoor protected space. Every rocket fired at Israel passes over the border communities and since they are an easier target, many of the attacks focus on them. Many of the interceptions carried out by the Iron Dome system take place in this region, and after a successful interception, the remnants of the enemy rocket as well as the remnants of the Iron Dome rocket fall to earth over these communities.

“In Jerusalem or Tel Aviv, there is generally at least 90 seconds after the siren to take shelter, in Gvar’am, they have four seconds,” Yisrael Glass of Israel365 said. “It is vitally important that there are bomb shelters everywhere.” 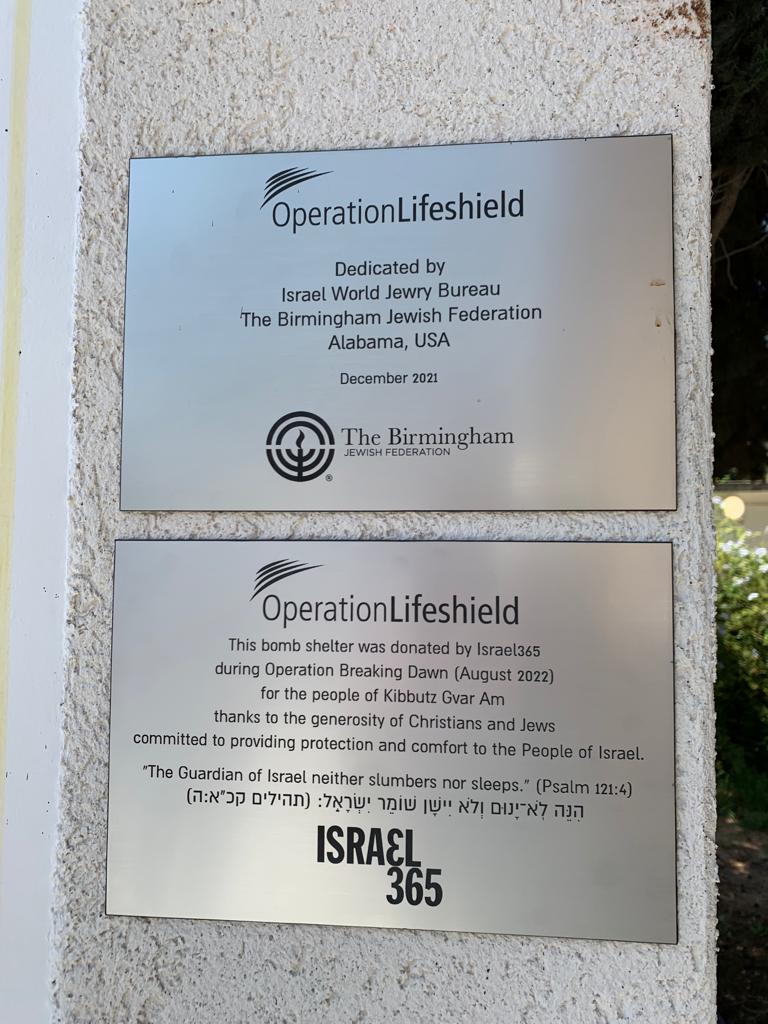 The new bomb shelter in Gvar’am is located adjacent to the synagogue, an older building that does not provide shelter from rockets. So if an attack takes place while the residents are praying, they can evacuate and take shelter immediately.

“Not everyone has access to bomb shelters and if the siren goes off when you are out in the open, it is a terrifying experience,” Rabbi Weisz said. “Last year, we placed a bell shelter just a few dozen meters from a children’s house where the kids play on the grassy field.”

Israeli law requires all new buildings to have a protected space but despite the ongoing threat, many residents in at-risk areas still do not have access to adequate shelters. A 2020 comptroller report found that nearly 30 percent of Israeli citizens do not have access to functioning bomb shelters near their homes, including over a quarter of a million people who live near the borders with the Gaza Strip and Lebanon. 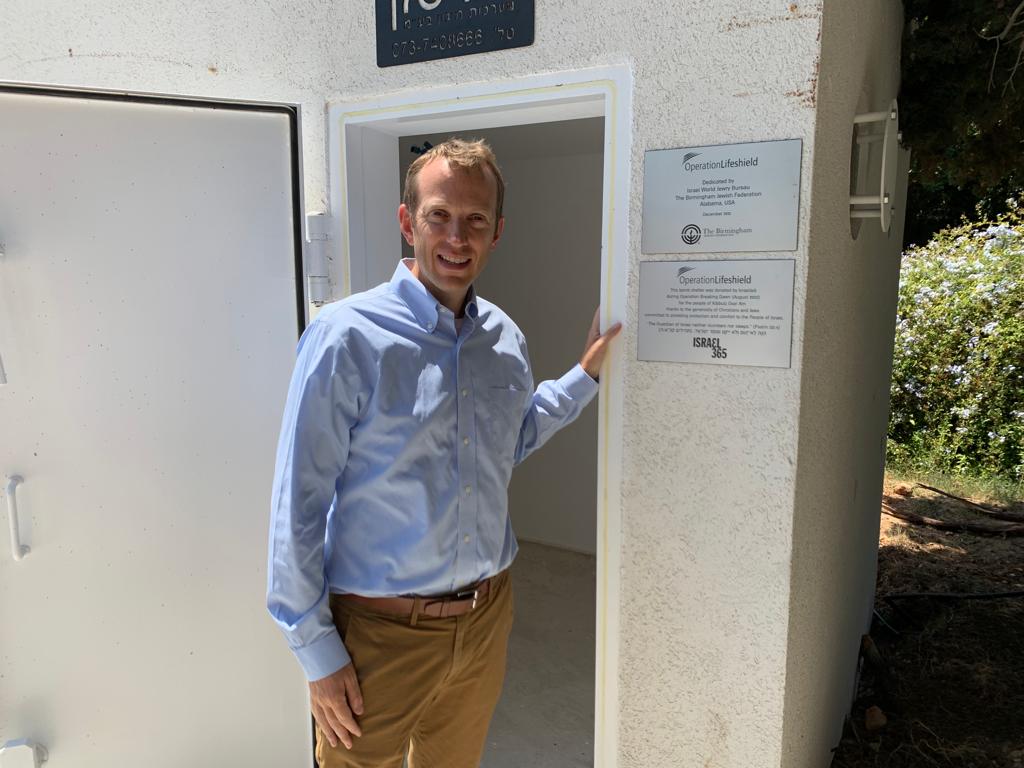 The shelter co-dedicated by Israel365 was a 30 metric ton cuboid protective shelter room. It is transportable, meaning that it can be moved (by heavy crane and truck) when needed to another location. The interior space is 4.1 square meters and can serve between 10-20 people during a Red Alert alarm. The ceiling thickness is 40 cm, which can withstand a direct hit. Door and window cover is constructed of military-grade steel. Rough-in infrastructure outlets and wiring pre-installed for electrical and communication systems, including options for lighting, air conditioner, and wifi. The protected room can be used for multi-purposes, including classroom, counseling and therapy room.

Operation Lifeshield meets weekly with Regional Security Chiefs and Officers of communities close-by Gaza, as well Northern border towns. We receive up-to-date assessments of the highest risk and greatest need locations for shelter placements, as well as recommendations for type of shelter required. Kibbutz GvarAm is located 5 miles from the Gaza border and lies between Gaza and major targets, such as Kiryat Gat. The newly-renovated synagogue (used for prayer services, the passage of life events, and cultural programs and lectures) completely lacked a shelter for the people frequenting this site.

Growing up under the shadow of threat has dire effects on the children of the kibbutz so Israel365 had medals made engraved with the term, “Shomrei Eretz Yisrael” (guardians of the Land of Israel). 500 medals were distributed to the local school children and another 480 will be distributed in the near future.

When presenting the medals to the principal of the school, Rabbi Weisz said, “The Jews of America didn’t hear about the war and what you and the children are going through.”

The principal responded, “Even the Jews in Tel Aviv didn’t hear all that we are going through.”

The inscription was especially significant to the principal.

“We have the Iron Dome protecting the cities of Israel,” he said. “But we, the border communities, are actually the Iron Dome for the rest of Israel. And the Jews of Israel are the Iron Dome for all the Jews around the world. It is a heavy price. At least half our children are displaying some form of emotional distress and many are being helped with counseling. There are a lot of complications living on the border. We are making this sacrifice for all of Israel.”

Rocket attacks from Gaza show no sign of going away. Tragically, rocket attacks from Gaza have become a regular occurrence, only increasing with time. In 2012, over 2,200 rockets were fired at Israel and two years later, 2,800 rockets and an additional 1,700 mortars were fired at Israel. The attacks continued, culminating in May 2021 when more than 4,340 rockets were fired toward Sderot, Ashkelon, Ashdod, Jerusalem and other communities. Ten Israelis were killed. By 21 May, when a ceasefire came into effect, at least 4,000 rockets had been fired from the Gaza Strip towards Israel.

Bowman pledged to continue his efforts until all of Israel is safe.

“Operation Lifeshield has recently increased the number of shelter projects to vulnerable communities in Southern Israel and Northern Israel, with shelters being ordered every week,” Bowwman said. “Donations from the US, Canada, and around the world allow our work to happen. Additionally, OL has delivered 30 firefighter trailers and ATVs to combat IED balloons crossing from Gaza into Israeli farms along the Gaza border. Also, communication equipment and Covid -related supplies for frontline workers.” 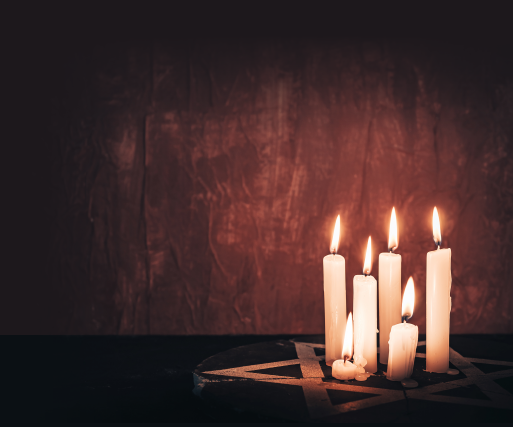