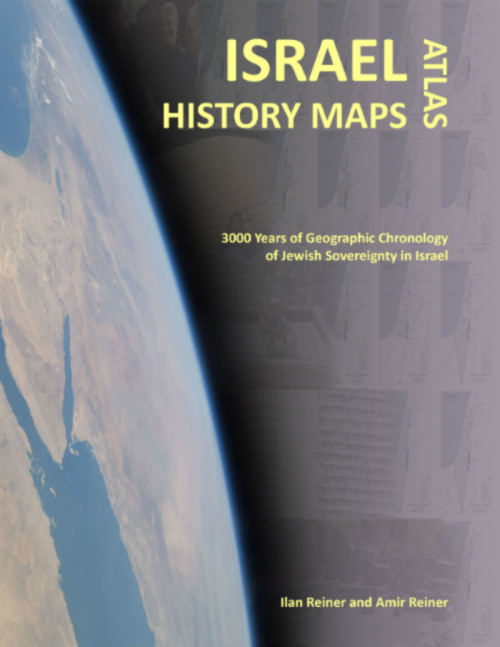 An atlas of Israel’s history by Ilan Reiner and Amir Reiner.

Ilan Reiner grew up in Israel, and even from a young age had a great grasp of Jewish and Israeli history. He is a two-time winner of the famed “Israel’s Youth National Bible Contest”.

Ilan is a history and geography researcher, with an emphasis on Jewish history during the second temple period, which is what led him, together with Amir Reiner, to put together the Israel History Maps book.

Amir Reiner is a graduate from the prestigious Technion in Haifa, and like Ilan,  has a deep love and appreciation for Israel. He took part in an “Online Ambassadors” program, which teaches people how to help defend Israel’s reputation online.

Amir enjoys creating new media to help drive a point home, which is what led him the idea of creating a series of maps that defined Israel’s borders throughout history. He currently lives in Haifa with his wife and kids.

There is no piece of land more desirable than the tiny slip of land known as Israel. In Genesis, God promises Abraham that it will be given to his descendants – From Egypt to the Great River. Since that point in time, every nation has tried to take control of the Land.

The one constant presence in Israel over the past 3,500+ years is the Jewish Nation. Israel History Maps takes a unique look at how the borders of Israel, with regard to Jewish rule, have evolved.

The book is divided into three eras:

The First Era – The first era begins with Joshua conquering the land. This happened right after Moses death, in the book of Joshua. It includes the period of the Judges, King David and King Solomon. The era ends with the destruction of the First Temple.

The Second Era – After a brief exile from Israel, the Second Temple was built, and this is where the second era picks up. The book chronicles the changes during the 400 years the Temple was standing, as Jerusalem was ruled by different kingdoms.

The Third Era – This brings us to modern times and the creation of the State of Israel, and includes the changes due to wars and peace treaties.

The book is comprised of 50 maps, in chronological order, that are very easy to follow and give the reader a clear understanding of how the borders have changed throughout history.

All of the maps were designed with a uniform scale, and have a dynamic timeline, which helps put the maps into historical context.

This book is a great tool for educators, students, community leaders and history buffs alike. As you flip through the 50 maps, you will see the history of this great land come to life.