Bringing in the Hebrew Month of Kislev
November 12, 2015 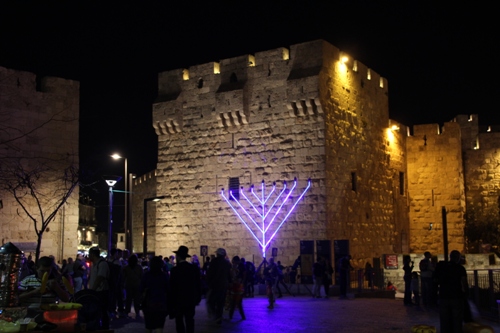 Hanukkiah in front of the Old City walls in Jerusalem. [Photo: Wikimedia Commons]

The Hebrew month of Kislev is the third month in the calendar, counting from the Jewish new year of Rosh Hashana. It marks the beginning of the winter and always falls out during the darkest days of the year. It is therefore a fitting time to celebrate the Jewish holiday of lights, Chanukkah.

Beginning on the 25th day of Kislev, Chanukkah commemorates several miracles which took place during the time of the Second Temple. Under Syrian-Greek rule, the Jews of Israel were subject to increasingly harsh restrictions on practicing their religion. In addition, no small number of Jews felt that assimilation into Greek culture would be the best thing for the Jewish people.

One family, however, disagreed. The priestly family of Matityahu and his five sons, including the famous Judah Maccabee, fought back, leading a small Jewish army against a vast Syrian-Greek one. With God on their side, the meager force was victorious over the powerful army, a fact which is celebrated during Chanukkah with special prayers.

Upon liberating the desecrated Temple from the hands of the Syrian-Greeks, the Jews sought to purify the site and rekindle the Menorah, the seven-branched oil lamp which stood within. However, they could only find enough oil to last a single day, and it would take eight days to make more. The Jews lit the Menorah anyway, and miraculously, the oil continued burning for the entire eight days! For this reason, Chanukkah is celebrated for eight days each year with the lighting of candles or oil lights, one on the first night then one more each night till eight burn on the final night. Also in recognition of the miracle of the oil, it is traditional to eat oily foods, such as fried potato pancakes, called latkes in Yiddish, and jelly donuts, known in Hebrew as sufganiyot.

Besides Chanukkah, however, a number of other significant events took place during Kislev. Noah’s ark came to rest atop Mount Ararat, and Jacob’s eldest son, Reuben, was born during this month. Also during Kislev, the writing of the Talmud was completed, and the construction of the Second Temple resumed after it was halted by enemies who interfered with the Jewish community and brought slander against them to the king. Famous deaths in Kislev include Abel, killed by his brother Cain, and Rabbi Judah HaLevi, who collected and recorded the oral teachings of what is now known as the Mishna.