Bring Musical Joy into Your Life with Yerachmiel Ziegler
November 18, 2015 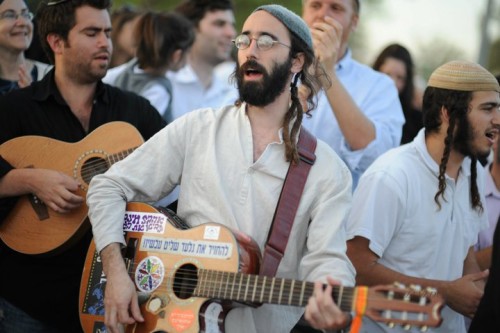 If you have ever listened to any Jewish music in the past nearly three decades, you have most probably heard the melodious voice and tunes of Yerachmiel Ziegler. Yerachmiel’s colorful background includes innumerable performances with top children and adult Jewish musicians, as well as participation in over a hundred commercial records.

“From a young age I was asked to sing on children’s albums with some of the best loved musicians, such as Uncle Moishe,” shared Yerachmiel with Israel365. “I guess that I was born to be a performer.”

Growing up in Monsey, New York, Yerachmiel presently lives in Israel with his wife and children. He recently moved from the Biblical city of Shilo to the holy city of Jerusalem.

Not only does Yerachmiel make beautiful music all over the world and create well accepted CD’s, he also has a sought-after band for weddings and events called Ruach Hakodesh Orchestra. The orchestra combines some of the best musicians with the widest variety of genres, including traditionally Rabbi Shlomo Carlebach influences as well as classic Klezmer, Chassidish (Breslov, Chabad), Middle Eastern Sefardi and Lithuanian styles, with a twist of Celtic, jazz, funk, reggae, bluegrass and trance for good measure. He also runs Little Apple Studio, a place to create high quality audio recordings, videos, and graphic design.

“After my child album days, I was in a Jewish version of the Backstreet Boys band called ‘Hamsa’,” noted Yerachmiel. “My music then moved to a Zionist Progressive style that mixed in a bit of heavy rock. I only wrote about stuff relating to Israel. Now, I write on a wide range of topics, and my music is often referred to as spiritual folk reggae.”

A truly eclectic performer, Yerachmiel has shared the stage and productions with the top names in Jewish music, including Matisyahu, Avraham Fried, Yossi Piamenta, Aaron Razel and Moshe Yess. Yess, perhaps best known as one of the first Orthodox Jewish musicians to harness American-style music to reflect the beauty and values of Judaism in English along with spreading kindness through his music and performances, was a big influence on Yerachmiel.

“Moshe passed away in 2011. Before he died, he gave me his permission and blessing to put out his music from the ‘80’s and make it more contemporary. The ‘Yess Legacy Tribute Album’ was co-produced with Gershon Veroba, another highly acclaimed talent in the Jewish world. Some of the top musicians today have joined me in this meaningful project. Moshe inspired me both personally and professionally,” reflected Yerachmiel to Israel365.

One of Yerachmiel’s hit CD’s is Raza D’Shabbos (The Secret of Shabbos). Created with Razel, the songs capture the joy, spirit and holiness of Shabbat. With its mix of jazz, blues, funk, rock and, of course, a bit of traditional flavor, The Secret of Shabbos is quickly becoming the must have CD of the year.

For Yerachmiel, one of the highlights of his extensive career is the interesting experiences and people he has met along the way. Sharing a moving story with Israel365, Yerachmiel remembered, “One of my greatest musical experiences was doing a concert for Christian evangelists who were visiting Israel for the first time. They were totally open to prayer, connecting, singing, super connected. Instead of playing for them, I felt that I was playing with them.”

Inspired by this occasion, Yerachmiel, who has a strong Jewish education, stated, “We can learn a lot from Christian evangelists. Jews and Christians are much more similar than different. Focusing on the ways that we are alike builds connections. As long as Christians don’t missionize and are honest about who they are, strong bonds can be formed.”

To his friends, Yerachmiel has been nicknamed “Rocky”, and we can imagine why. Not only does he rock-around-the-clock, he can also rock-the-house-down with his wide-ranging talents. As Yerachmiel reflected, “I enjoy playing music with a purpose beyond just the music. I have played for peace groups, army bases, hospitals, in Times Square and in front of the UN, even in Gaza. I love playing in schools for kids because they provide the most honest reactions. Hanukkah is a particularly busy time for me, as I am often asked to lead candle lightings all over the world. I once did a candle lighting for a group of Jews, Christians and Muslims on Har [Mount] Gerizim near Shechem [Nablus].”

Now, that’s something to sing about!