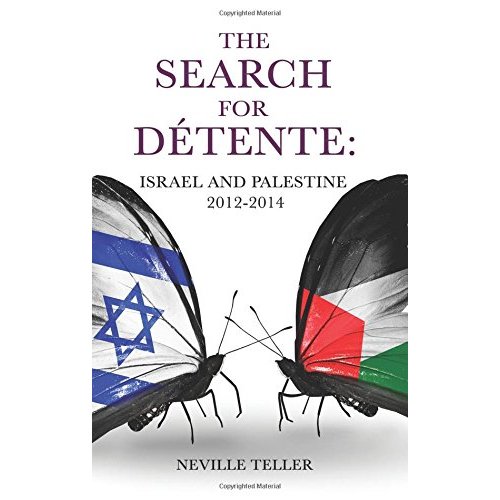 The Search for Detente, by Neville Teller

The phrase, “Everything old is new again” might be the perfect description for Neville Teller’s The Search for Détente: Israel and Palestine 2012-2014. With the ever-changing yet repetitive political stalemate in the Middle East, Teller wisely chooses to focus on peace talks that ran from July 2013 to April 2014. However, the dates are also deceptive. The book also provides an important and fascinating historical overview of the Middle East,  along with modern-day insights in order to clarify present-day phenomena.

“Détente” is a French word which means “relaxation”. It is used in political situations to refer to the easing of strained relations. Teller, always the optimist, had hopes in the peace talks initiated by American Secretary of State John Kerry, Israeli Justice Minister Tzipi Livni and Palestinian negotiator Saeb Erekat. “I really believed there was a chance of some sort of peace agreement being reached,” notes Teller. “The omens seemed rather favourable.”

Yet, especially when it comes to Israeli/Palestinian relations, optimism is often premature. As Teller notes in his book, “A final verdict on Obama’s ‘engagement’ with the Muslim world? Brave, but foolhardy.”

The Search for Détente focuses on the negotiations which ended in April 2014, when both the Israelis and Palestinians remained non-committal to changing the political climate. Included in Teller’s limited timespan is actually a great deal of Middle East political history. These crucial but often unknown facts serve the reader well in providing an excellent overview of the true issues concerning peace in the region.

Additionally, during the nine months of these peace talks, important occurrences happened all over the the Middle East. Syrian civil war broke out, and Syrian president Bashar al-Assad used chemical weapons. Egyptian President Mohammed Morsi was overthrown, and Israel’s Operation Protective Edge war in Gaza was fought to end Hamas’ rocket attacks on civilians. These are all included in the book.

Teller’s keen insights into the Middle East are presented without bias. As a commentator on the Israeli/Palestinian scene for over thirty years, he is well suited for the task of presenting the complicated Israeli/Palestinian situation in an understandable and enjoyable read.

Teller has been published in a variety of journals and online. He is a regular writer for the online Jerusalem Post, the Eurasia Review, the Albany Tribune, and his own blog “A Mid-East Journal – A journal charting events in the Middle East and beyond concerning the eventual settlement of the Israel-Palestine situation”.

Born in London and educated at Owen’s School and St Edmund Hall, Oxford, he is a past chairman of the Society of Authors’ Broadcasting Committee and of the Contributors’ Committee of the Audiobook Publishing Association. He was made a Member of the Most Excellent Order of the British Empire (MBE) in the Queen’s Birthday Honours in 2006, “for services to broadcasting and to drama”.

The Search for Détente is based on articles Teller wrote during 2012-2014. It provides a unique perspective on another effort to resolve the Israeli/Palestinian dispute. Though the situation remains seemingly intractable, Teller received a letter from Tzipi Livni herself commending him on his book. She writes, “I appreciate your support of our efforts to bring peace to our region and hope such care will hasten its arrival.”

For those who follow the news about the Israeli/Palestinian situation, which is hard to miss given that it often gets top billing, The Search for Détente puts the chatter and  prejudice of the perplexing Middle East into a coherent perspective. Teller is to be commended for taking on this challenging task and succeeding.