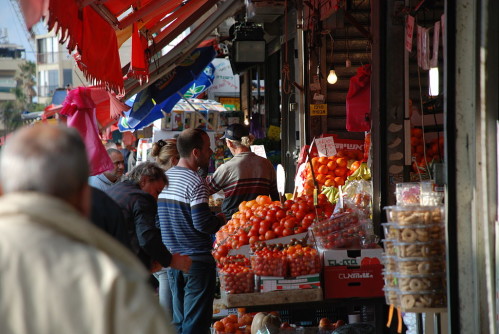 Catch the Jew, written by Tuvia Tenenbom, can best be described as a non-fiction parody of Israel, its inhabitants and its visitors. This blunt, humorous, sarcastic, engaging book brings the reader to places few have gone before.

Tenenbom is an Israeli-American who left his ultra-Orthodox Jewish roots behind. Born in the city of Bnei Brak, outside of Tel Aviv, he is a best-selling author, journalist, dramatist and founder of the Jewish Theater of New York. With a BS in mathematics and computer science, rabbinical ordination, and extensive background in the study of Christianity and Islam, he was named one of the “best minds in America” by Germany’s prestigious Die Zeit publication.

Catch the Jew documents Tenenbom’s seven month journey through the Promised Land. Passing himself off as a non-Jewish German journalist, he manages to speak with the best, or might we say, the worst that Israel has to offer. The overweight, blonde, round spectacle-wearing Tenenbom, with his vast knowledge of all things worldly, his talent for asking just the right questions and for being a good listener in the face of adversary, seems to be the right choice for the job of getting people to spill their true views about Israel, Jews, politics and more.

The book abounds with pictures of the author warmly hugging a wide variety of people, from ultra-Orthodox Jews to Palestinian leaders, Israeli politicians, left-wing Israelis, and just about everyone in-between. Clearly, the man did meet with the people he writes about, and they certainly seem to have embraced him.

With the book written like a travelogue, the reader gains insights into the prevailing views held by various populations about the Israeli political situation. Though Tenenbom’s findings are rather bleak, he does manage to dig up the dirt found within Europeans, Arabs, left-wing Jews and others that he encounters along the way, often with humor if not wonderment.

Tenenbom’s unassuming style, along with his command of languages and knowledge of Islam and Judaism, allow him to move effortlessly between Israel’s (sometimes dangerous) borders, as well as its colorful people. His skill at asking tough questions often throws the interviewees off guard, bringing out the flaws in their arguments or beliefs or, even worse, leaving them sticking firmly to their baseless views.

He is particularly critical of the so called ‘moderate’ Palestinians who tend to be anything but, left/liberal Israelis who come across as self-hating, and European NGOs who are pouring millions of dollars into the anti-Israel propaganda machine.

For example, Tenebom exposes the flaws of B’Tselem, a so called, “Israeli Human Rights Organisation”. During a tour of the Arab West Bank, Tenenbom is forbidden to photograph the vast Arab villas, as that would spoil the B’Tselem “suffering Arab under Israeli rule” narrative.

Perhaps the greatest wake-up call of the book is Tenenbom’s exposure of European NGOs. It becomes apparent that in the name of peace, they actually hate Israel at least as much as many Palestinian activists, and are willing to fund endless misleading movies, tours and organizations to build their anti-Israel message in the most professional of ways.

Tenenbom not only has a voracious hunger for the “real” story underneath the facade, he also has a great appetite for Israel’s delicious food. Along his travels, he regularly comforts himself from his upsetting conversations with labeneh, strudel, apple pie, kebab, rugelach, hummus and schnitzel, adding to the book’s tone of, “Come, my friend. Join me in my other-worldly adventures.”

Though often captivating, witty and interesting reading, we can’t call Catch the Jew the full picture of Israel. As anyone who has actually visited the country and spoken to its people can attest, most say that it is a warm, beautiful and peaceful place.

Yes, the Jewish state faces serious threats and hate, both within and without. However, most Israeli Jews are proud of their country and its incredible successes, achieved in its short time of existence. Tenenbom might lead one to conclude that Israel’s survival is on the rocks. Let’s hope that this “man of the theater” has simply written a tragic comedy filled with skilled characters who play their parts well.