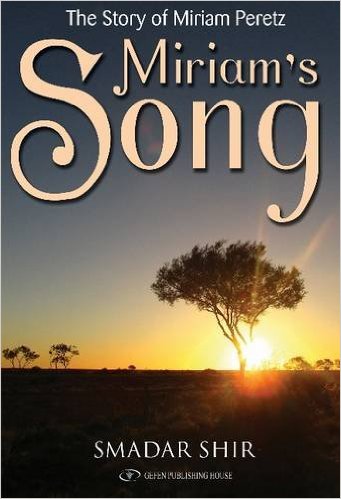 Miriam Peretz has become somewhat of a celebrity in Israel. No, she’s not a new pop singer or the star of a trendy reality series. She doesn’t seek out attention or crave the spotlight. Miriam is the type of superstar who exemplifies resilience and endless positivity that every mother wishes she possessed; yet the woman whose heartbreak has left her in a place no mother envies. Now, all can learn and be inspired from her experiences in the new book Miriam’s Song.

Miriam’s Song (Gefen Publishing House) tells Miriam’s story and depicts how one woman experienced unspeakable tragedies yet courageously chose to live a life of hope while inspiring the nation of Israel. The Israeli bestseller, originally written in Hebrew by Smadar Shir, is now available in English for the first time.

Beginning in her childhood in Casablanca, Morocco, Miriam was faced with hardships. She grew up in a home that measured just two square meters before moving with her family to the Hatzerim immigrant camp in Beersheva. However, she persevered, studied hard and became a successful student. Years later, she met her husband Eliezer while riding a bus, and they were soon married, eventually having 6 children.

Miriam’s oldest son, Uriel, a commander of an IDF Golani Special Forces Unit, was fatally wounded at age 22 by an explosive device planted in Lebanon by Hezbollah terrorists in 1998. Miriam transformed the pain over his death into education and volunteer service. She began to visit schools and military bases, talking about her son’s leadership vision. After pulling through the devastation, Miriam’s husband fell ill a few years later and died. To Miriam, it is clear that Eliezer died of a broken heart following the murder of Uriel.

Despite a law exempting siblings of a fallen soldier from military service, Miriam’s three other sons opted to serve. Almost a decade after Uriel’s death, Miriam lost her second son Eliraz, a major in the Golani brigade. In an interview with Aish.com, Miriam describes the scenario: “Eliraz and his unit were patrolling along the fence, when they saw two Palestinians planting bombs. They went to stop them, and one of the Palestinians sprayed bullets in the direction of the soldiers. Eliraz had a hand grenade in his vest, and one of the bullets hit the grenade’s pin, causing it to explode. It was a fluke, but it was God’s way of saying that Eliraz’s time had come.”

Overnight, the mother who lost two sons, as well as her husband whose heart couldn’t bear the death of his oldest son, became a symbol of grief and of strength.

In December 2010, IDF Chief of Staff Gabi Ashkenazi awarded her a medal of appreciation. He said: “Miriam’s ability to continue to express her deep pain and channel it into a contribution to the education and formation of future generations, serves as an example and model of inspiration for us all.”

After all the tragedy Miriam Peretz has been through, she continues to live life to its fullest and see the positive in whatever befalls her. When asked why she thinks God chose her for this incredible challenge, she replied, “I know that I will never have answers. After Uriel was killed, I realized one thing: A person cannot go about enjoying the good things in life, and then complain to God when things go bad. A person has to believe that God is running this world in all respects. As painful as some things may be, my faith in God only grows stronger. Because I know that whatever God does is for the good, and I accept it with love.”

So, yes, Miriam has become somewhat of an icon in Israel. Not the kind of star who strives to be in the spotlight, but one who was put there against her will – or rather, by the will of God. This celebrity knows how to use that limelight for pure good, reaching out to other bereaved families and spreading the extreme strength and unadulterated optimism of her entire family.