Beautiful Mezuzah Shows Pride in the Land of Israel
January 14, 2016 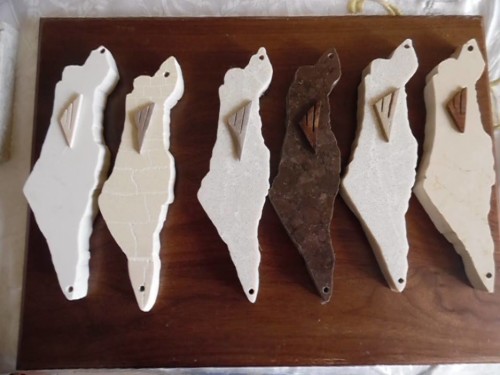 Unique, hand-crafted mezuzah cases in the shape of the Holy Land. [Photo: Facebook]

Jews of all walks of life place mezuzahs on their doorposts to reaffirm their belief in God and their unique mission in the world. A mezuzah is a parchment made from the skin of a kosher animal with the two first paragraphs of the Shema prayer inscribed on it by a special scribe or sofer stam. The Shema is recited three times a day and reaffirms the unwavering belief in and loyalty to the God of Israel.

The mezuzah scroll is then placed in a hard case for protection before being affixed to a doorpost. These are sometimes plain, simple cases that are merely functional and don’t have a lot of added significance. Other cases, however, are beautiful adornments for the home rife with meaning.

The talented craftsmen at the Shins of Stone factory in Israel have wrought just such a case: a hand-crafted case in the shape of the modern map of Israel. This mezuzah is special because it reminds us just how miraculous it is that the Jews have returned to their historical homeland after 2,000 years.

From a Kabbalistic point of view, the mezuzah wards off the “evil spirit”. It’s also a sign of national pride and the Jewish ability to maintain traditions through the darkest times in history. Many doorposts in today’s Europe and Middle East where Jews once resided still carry the marks of a mezuzah—a symbol of Jewish perseverance.

The mezuzah separates the public from the private domain. It wards off outside influences from the Jewish home—in many cases, ones that attempt to cut the Jewish people off from their faith in God and unique way of life. It’s placed on the doorway of every habitable room in the house, as a reminder to maintain purity of thought and holiness of action even when in the privacy of one’s own home.

The Hebrew letter Shin often appears on the mezuzah case. It’s the first letter of God’s name Shaddai, an acronym for “Guardian of the Doors of Israel”.

God promised the entire Land of Israel as an “inheritance” to the offspring of Abraham, the first Jew. (Genesis 17:8)

After two millennia in Exile that saw the Jewish people endure countless persecution, mass expulsion, the Crusades and finally the Holocaust, in which a third of European Jewry perished in the gas chambers, the Jewish People have returned to the land of their ancestors, fulfilling God’s promise to His people.

While the modern State of Israel is far from the borders promised to us by God, we’re privileged to live a “free people in our land.” In a day and age when genocidal wars and mass terrorism pervade much of the free world, the Land of Israel has remained the “eye of the storm”. This is the realization of God’s promise to Abraham.

Show the spirit that has personified the Jewish people throughout history by getting a unique mezuzah in the shape of the State of Israel to adorn your doorstep.