This is my God, and I will make Him a habitation, the God of my father, and I will ascribe to Him exaltation

When Julia Agranovitz first came to Israel in 1993 from her native Russia, she was confronted with the beauty and complexity of the holy land.  Searching for a way to channel her artistic talents and her new found passion, she began painting on small scale canvases. Julia also prints lithograph on canvas as well, both methods requiring great attention to detail and excellent workmanship.

When looking at her oeuvre, it is obvious to see the multiple influences on her work, but Jewish themes are at the core of her pieces. Her miniature art reflects the elusive mystery of Israel’s landscape and the diversity of its culture. Encapsulated in these five small scale canvases are snapshots of Jewish tradition and Jewish history.  Each canvas is bordered and framed in faux gold. 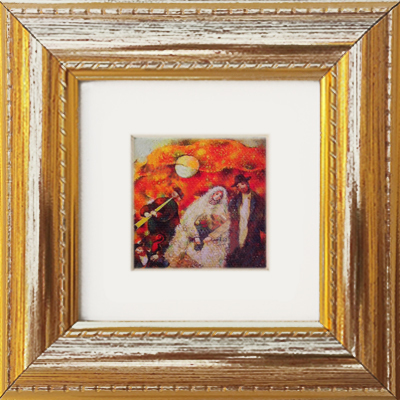 Though small, these paintings create a grand effect. Jewish traditions are conveyed through modern art to create a both meaningful and trendy atmosphere to your home decor.

Songs for All Seasons, Music for All Reasons: Breaking the Lock