And you, go to the end, and you will rest and rise to your lot at the end of the days

An anonymous hitchhiker is motivated to find his way to Armageddon. When the driver who picks him up asks why he’s headed for such a place, he answers, “I guess it’s just the place to be at this time of history.” Sensing his uncertainty, the driver hands his young passenger a guide book, announcing, “It is everything you need to know for your journey.”

The title of the guide book is The Hitchhiker’s Guide to Armageddon. 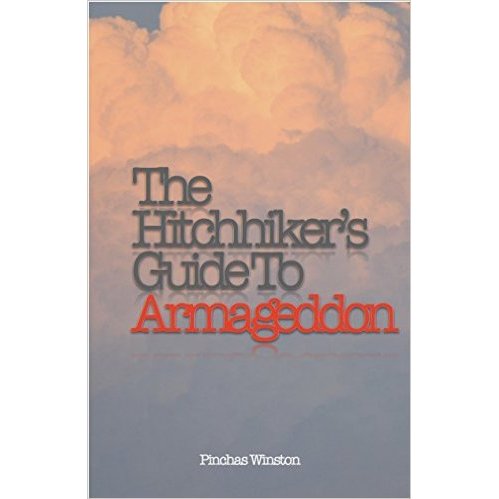 With that premise, Rabbi Pinchas Winston, a Torah scholar and prolific author who has been teaching and writing about the Jewish perspective on the End of Days for the past two decades, begins his newest book.

The Hitchhiker’s Guide to Armageddon actually is a guide to understanding the momentous days in which we live. It begins by describing what Armageddon actually is, based on Jewish sources, including its connection to an ancient city in Israel called Megiddo. As Chapter 1 continues, Winston offers much more detail about the final War of Gog and Magog, which is mentioned in chapters 38 and 39 of the Book of Ezekiel and chapter 14 of the Book of Zechariah. Chapter 1 also  includes some discussion of Moshiach ben Yosef (Messiah, son of Joseph) and his role in the final redemption.

Chapter 2 addresses itself to the question of why the world must undergo such dramatic battles before the End of Days. It all has to do with putting God at the center of the stage, to remind the world that God is, and always was, “in charge of history.”

Having established that God has some earth-shaking events lined up for those of us who are alive at this time in history, the third and fourth chapters are about what we can do to best prepare for what’s coming. Winston answers this by returning to the conversation between the anonymous hitchhiker and his driver/spiritual guide. The fourth chapter ends with a powerful insight about what quality makes a person spiritually developed.

Again, using the literary device of a driver as spiritual guide explaining to his passenger/student some of Judaism’s deepest ideas, Chapter 5 takes on the question of why there is so much pain at the End of Days. (HINT: It has to do with getting the world ready for redemption.)

As the passenger’s location gets closer and he’s about to exit the vehicle, the driver has a few more gems of wisdom to share. He speaks about adjusting one’s priorities in life, in order to be in the best possible position when redemption comes.

In order to help readers better understand the Jewish content in The Hitchhiker’s Guide to Armageddon, the book ends with a glossary of Hebrew terms.

Using the literary device of an anonymous hitchhiker and driver as spiritual guide helps Winston convey complex information about the End of Days in an accessible way. The Hitchhiker’s Guide to Armageddon is a small book, but don’t let its size deceive you.

It packs a powerful punch.