Your daily connection to the Land of Israel
Jerusalem

"The LORD bless thee out of Zion; and see thou the good of Jerusalem all the days of thy life." 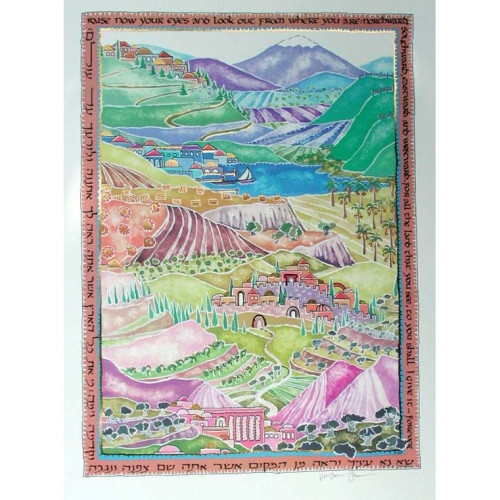 Rebecca Shore was born and raised in New York, living there until she made Aliyah (moved up) to Israel in 1984. She currently lives in the Old City of Jerusalem with her family, two of the major things which serve as inspirations for her artwork. She opened the doors to Art From the Heart…of Jerusalem in 1990, and today her artwork can be found in Jewish homes all over the world.

Over the past 25 years she has become one of the more popular Israeli artists, capturing the beauty of thousands of years of Jewish tradition and turning it into modern art. Her unique style combines colorful imagery and ink stitching, together with a connection to Jewish history, be it a symbol or a verse from the Bible. This defining connection has made her work instantly recognizable.

In the early days of her career, before starting Art From The Heart, Shore would create personalized, commissioned “name pictures” that fused the name of the person with a relevant image or Biblical verse that explained the meaning of the name.

It wasn’t until Rebecca was pregnant with her 3rd child, Michael, that her brother inspired her to create a very large and intricate Noah’s ark painting.  The first run of Noah’s Ark prints sold out within 6 months, and on the advice of her mentor she started her own line of work.

All her work has a deep connection to the Land of Israel and Jewish tradition and is connected with verses that are found in the Bible.

Her beautiful illustration of the Four Holy Cities of Israel is a perfect of example of this. Depicting the 4 holy cities of Israel, Safed, Tiberias, Jerusalem and Hebron, it truly captures the beauty of Israel and its four most spiritually significant sites.

Living in the Old City of Jerusalem is what inspired Rebecca to create Jerusalem Rebuilt. Bordered by a verse from the prophet Daniel, which discusses the redemption and rebuilding of Jerusalem, the illustration depicts a post-messianic Jerusalem, complete with the holy Temple and the beauty surrounding it.

A creation by Rebecca Shore is the perfect gift for any occasion, whether you’d like a name picture commissioned for the birth of a child, a ketuba or a custom-made piece of art to beautify your home, you’ll find the perfect gift at Art From the Heart….Of Jerusalem.

In their final days, we have an opportunity to support aging survivors

An Unbelievable Tale from Nacham

Hayovel Joins Israel365 in the Fields of Bat Ayin