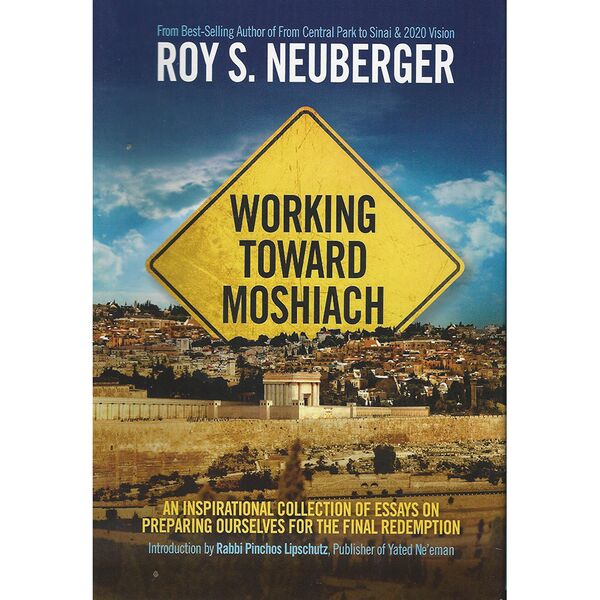 Roy S. Neuberger’s latest book, Working Toward Moshiach (Messiah), is a spiritual security blanket. It contains 500 pages of deceptively simple stories and vivid reminders that the only way to survive the irrational times in which we live is to cling to God.

In his Foreward, Neuberger reminds us that, in the End of Days, we will see echoes of the events that occurred at the time of the Biblical exodus from Egypt. He asks his readers to hold on, to have faith, to see God working, despite the seemingly unfettered chaos happening in the world today.

“If we don’t know that a similar situation is taking place now, then it is hard to imagine how we will have the strength to get through current difficulties. We have to know where all this is heading, and our guidance can only come from the classic Biblical sources and the classic Torah commentaries which explain and interpret those Biblical sources. There is nothing else on which to depend,” he writes.

In one of his most visual teachings, Neuberger emphasizes the connection between the Biblical exodus from Egypt and the final redemption when he discusses the Jewish custom of removing some drops of wine from our cup during the ceremonial Passover seder (festive meal). He quotes the Zohar, the most important mystical commentary on the Bible, which teaches that the drops we remove from the wine cup represent the exodus from Egypt but the wine that remains in the cup represents “the final redemption, the ingathering of the Jewish People and the coming of Moshiach. The difference in magnitude is staggering! Imagine how powerful the final redemption will be.”

Working Toward Moshiach is a collection of weekly columns Neuberger wrote for the Jewish newspaper Yated Ne’eman over the past few years. The book is organized by the weekly Bible reading. The final chapters are organized by significant Jewish holidays. Each chapter includes at least one column that was published in the years 2009-2014.

On every page, Neuberger urges his readers to truly sense the nearness of the End of Days. His columns contain a blend of homespun storytelling, quotes from great rabbis, past and present, and his own reflections on the necessity to spiritually prepare for the coming of the messiah: “We have to guard ourselves against being frightened by headlines. Our salvation comes from Above.” In the columns that were written more recently, the reader can readily sense an escalation in the author’s urgency.

Neuberger grew up as a secular Jew in a wealthy New York household. He came to an understanding of God and of his Jewish heritage as an adult. After his autobiography From Central Park to Sinai: How I Found My Jewish Soul was published in 2000, Neuberger and his wife started touring and lecturing all over the world. He is now a sought-after speaker and Working Toward Moshiach is his fourth book.

Video: The Angel Who Delivered Me from Hardship

Video: A Slice of God’s Paradise