I will bless those who bless you, and him who curses you I will curse, and in you all the families of the earth shall be blessed 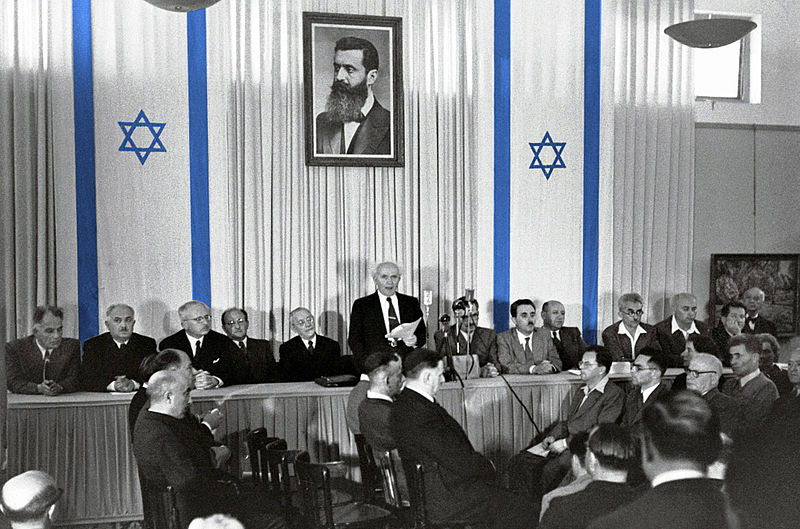 Declaration of the State of Israel. Photo: Wikimedia Commons

There are few people who are taking on Jewish liberals as much as Dr. Emmanuel Navon.

Emmanuel Navon is a leading Israeli academic, author, news commentator and public speaker specializing in foreign affairs. His most recent book, “The Victory of Zionism”, is a response to Peter Beinart’s “The Crisis of Zionism”, known as “The Bible of J Street” according to Navon.

“The Victory of Zionism” is a must-read for every household believing in the ideals of democracy and relentless commitment to the State of Israel and the Jewish people.

According to Navon, Beinart’s primary claim is that “the attitude towards Israel today is similar to the attitude of German Jews towards Eastern Jews in the 1930’s – which is that German Jews believed that they lived in the perfect country and believed they were perfectly integrated, and if it wasn’t for the Eastern Jews, there would be no anti- Semitism.”

Beinart believes that the ultimate solution for Jews is to be true Western Jews. He believes that Israel is an embarrassment for Jews and is the main source of conflict in the Middle East. Beinart advocates for the two-state solution to solve all of Israel’s problems and guarantee Israel’s future as a democracy.

“The problem with Peter Beinart is that he doesn’t understand the difference between reality and fantasy,” explains Navon. “The original meaning of liberal is someone who believes in personal freedom.”

“The Victory of Zionism” reminds readers that the State of Israel’s true point of success is the freedom given to its citizen.

“It has been proven time and time again that Israel has succeeded as a country. By looking at Israel’s history over the past hundred years we can see how we have grown our deserts into a blooming country,” Navon states, “while our neighboring countries have been declining.”

Regarding the threat posed by religious radicalism, Navon’s “Victory of Zionism” goes into detail about radical liberalism cementing a pathway to the success of radical Islamic ideologies.

Navon argues that the corrupt nature of the PLO, the rise of Islamic fanaticism, and the failure of Arab states to promote democracy make for a conflict that is essentially unsolvable. He reminds readers that Israel, a democratic and technological powerhouse in the midst of the most volatile region in the world, plays a key role on the international stage.